When five weary travellers meet in a tavern in Tillersham, they discover that the beer kegs haven’t just run dry, but have vanished completely.

Having made their way to The Nocking Point, the tired & thirsty Enkidu, Juna and Orryn meet the beer-bellied half-orc tavern owner Iras Truveck. But are disappointed to find the taps are dry as Iras’ entire brewery was stolen a few days ago.

Suddenly the door bursts open to reveal Gwendellyn & Gaius, both looking a little bedraggled from their nights on the road.

Gwen is reunited with Juna, who works in her family home. While Juna has been chasing after Gwen, Gwen has been running after Dwayne. Who has disappeared, taking Gwen’s money to collect his grandmother’s tiara from a pawnshop, to make their so-called “marriage” official.

Iras spotted someone matching Dwayne’s description in Tillersham a few days before, although he appeared to be holding hands & sharing a room with a “half-elf chap”.

Our five acquaintances head across Survelt Square to the packed & sticky floored Woodman & Wolf, which has the last kegs of ale available in town.

While ordering beers (with added strawberries for Gwen) Juna presses landlord Welton Grimble to see what he knows of the Nocking Point robbery. Welton has no idea of the cause and appears insulted at any suggestion he could be involved.

Gwen & Juna approach two off duty guards Iselle & Sully, however the watch don’t seem to have uncovered any suspects in the robbery. Before leaving them, Gwen politely, but forcibly, invites herself over to the guard house for a cup of tea the following day.

Meanwhile Enkidu, Gaius and Orryn are deep in conversation with a tearful Atrella & her wannabe high born friends. Atrella, the daughter of the captain of the guard, is devastated by the insults to her handwriting by ex-boyfriend Trimt. The son of Lady Vondelle, Trimt seems to be the desired catch of Atrella and for some of her friends too, with his strawberry blonde curls and white stallion Thadeus.

When Gwen returns to report her conversation, Enkidu’s description of Gwen as “not completely useless” leads to her returning solo to the Nocking Point, where a pre-bed chat with Iras reveals the Plenty Store, as a possible location for Dwayne’s family tiara.

The other four remain for a few more drinks, before returning to the Nocking Point for a drunken investigation of the barn, where the brewery equipment was nicked.

With Orryn’s discovery of droplets of arcane oil on the floor and three pairs of muddy footprints which lead into the barn before vanishing, it appears magic was involved in the crime.

Iras reveals there are only two known magic users in the area:

The terrifying sounding witch of the Lockholt Wood Ruana Witten, who is said to be “made of trees” and who he’s “pretty sure” is real.

And Lady Vondelle, mother to Trimt & Osken, and a well-liked benevolent figure in town.

While Enkidu, Gaius & Juna make their way upstairs for a sozzled sleep, Orryn stays in the barn pulling on his goggles of magical detection & finding the inside of the barn doorway glowing with the remnants of conjuration magic.

In the morning after tea & breakfast, the group split up, with Juna, Enkidu and Orryn making their way across Survelt Square to Dr Hograd’s surgery.

Finding the building abandoned, they let themselves into the back door to discover that the doctor’s alchemical equipment and shelves of medicines have all been cleared out.

Spotting Doctor Hograd’s diary – Orryn & Enkidu uncover writings on an odd illness called Gallows Cough and also her thoughts on the building of a new “ruined” tower at the Vondell manor.

Meanwhile, Gwen & Gaius have made their way into Drania Pine’s ramshackle Plenty Store. Despite Gaius’ attempts to assist by playing “good guard, bad guard”, Gwen finds no evidence of Dwayne visiting the shop nor of his family tiara.

As they step into the street Gwen bumps into the infamous Trimt Vondelle. Introducing herself as Gwendellyn Fabulosa, Trimt asks if she’s related to Dwayne – who the Vondell’s auditioned to be their family bard.

Trimt appears very taken with Gwen and invites her to luncheon tomorrow as well as offering Gaius an opportunity to audition for resident bard, before trotting away on his stallion Thadeus.

Making her way back across Survelt square, Juna meets town cobbler Jenni, who appears to also have a thriving career as town gossip.

Asking after Doctor Hograd, Jenni gives Juna a potential lead in regular visitor Mir – a guard whose Mum is ill with Gallow’s Cough. As well as blabbing that the Woodman & Wolf’s beer supplies have been stolen during the night.

At the guardhouse the less than famous five meet Mir Nellis standing watch at the door. Mir seems surprised that others have discovered the doctor is missing – to avoid panic the guard have been keeping her disappearance hush hush.

Without Doctor Hograd’s regular supply of medicine to keep the Gallow’s Cough at bay, Mir is very worried for their Mum’s health. And suggesting the witch in the woods might be able to brew the medicine, offers 20 gold pieces per bottle if they return.

With all leads pointing that way, the intrepid quintet set off into the woods… 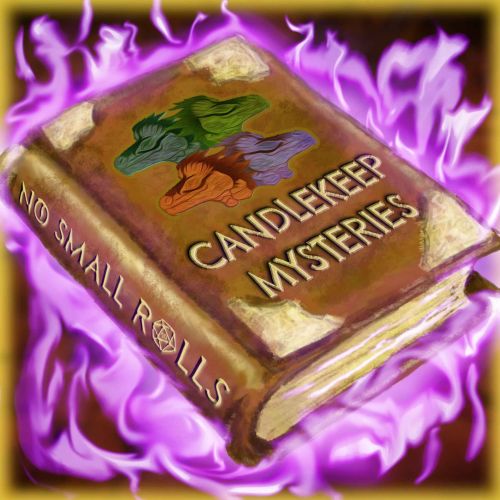